As Provost and Senior Vice Chancellor at Pitt, Ann E. Cudd has primary responsibility for the University of Pittsburgh’s academic mission. Her duties include supporting scholarly excellence among more than 4,600 full-time faculty members and student success among the University’s nearly 35,000 undergraduate, graduate and professional students on all five Pitt campuses.

Since her appointment in 2018, Cudd has focused her initial priorities on programs, strategies, and initiatives that bolster and enhance the University’s strength and vision for growth and transformation. These include leading efforts to personalize education, build on excellence in teaching and research, foster a culture of diversity and inclusion, improve access and lower student debt, support data-driven decision-making, and achieve efficiencies and cost savings.

In particular, her plans to address access and affordability, as well as diversity and inclusion, have propelled the development of the new Pitt Success Program, a ground-breaking initiative to invest in both current students and prospective students with the greatest need across all five Pitt campuses. Through the program, students who qualify for the U.S. Department of Education’s Pell Grant program now see those federal funds matched dollar for dollar by the University. Cudd has also launched a related initiative—the Provost Academy—a new summer bridge program designed to help students experience a successful first year, with ongoing opportunities for support throughout their remaining undergraduate years.

In 2019, Cudd spearheaded the creation of the University’s Diversity Statement and announced another signature effort, the Latinx Cluster Hire Initiative that aims to significantly increase the number of faculty focused on Latinx issues throughout the various departments and schools of the University. As well, inspired by public art at Pitt, in collaboration with Senior Vice Chancellor for Business and Operations Greg Scott, she formulated and charged the new Public Art Steering Committee to advise on issues related to the acquisition and placement of works of art in public spaces on campus.

Cudd has led the successful completion of several notable executive searches, including the presidencies of Pitt-Bradford/Pitt-Titusville and Pitt-Greensburg. Most recently, she chaired the search committee charged with identifying the University’s senior vice chancellor for the health sciences and John and Gertrude Petersen Dean of the School of Medicine.

Cudd previously served as Boston University’s Dean of the College and Graduate School of Arts and Sciences, which is the institution’s largest college. In that role, she oversaw all strategic decisions related to the college’s academic, financial, and administrative direction and growth. She also facilitated the success of more than 700 full-time faculty members and 17,800 students—including 1,800 graduate students.

Prior to joining Boston University (BU) in 2015, Cudd served for 25 years at the University of Kansas (KU), where she earned the title of University Distinguished Professor of Philosophy. At KU, she held various positions of increasing responsibility—from Director of Graduate Studies and Director of Women, Gender and Sexuality Studies to Associate Dean for Humanities in the College of Liberal Arts and Sciences to Vice Provost and Dean of Undergraduate Studies.

Cudd is an active faculty member in the philosophy department at Pitt, as she was at both BU and KU, and is an accomplished teacher and scholar whose research explores themes of oppression, economic inequality, capitalism and gender. Her philosophical interests—the focus of more than 60 books, articles, and chapters published under her name—span social and political philosophy, philosophy of economics, decision theory and feminist theory. 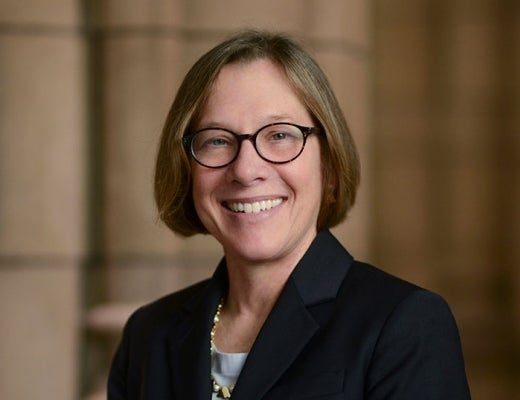 University of Pittsburgh
801 Cathedral of Learning